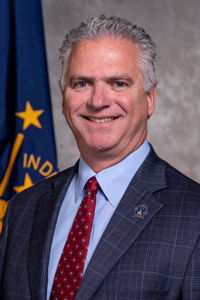 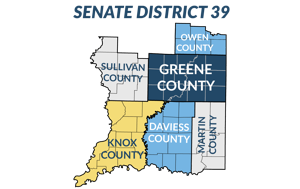 Indiana University, B.A. in Chemistry and Psychology, M.A. in Economics

State Sen. Eric Bassler (R-Washington) has been appointed by Senate President Pro Tem Rodric Bray (R-Martinsville) to serve as chair of the Senate Committee on Ethics and the School Funding Subcommittee. more »

Members of the Indiana Senate Republican Caucus today sent a letter to Indiana University President Michael McRobbie urging the University to reconsider and rescind the policy mandating all students and staff receive the COVID-19 vaccine. more »

A bill co-authored by State Sen. Eric Bassler (R-Washington) that would fully fund students attending school virtually due to the COVID-19 pandemic was concurred on by the Indiana Senate today by a vote of 44-4. more »

State Sen. Eric Bassler (R-Washington) recently presented two resolutions to the full Senate that would urge the Indiana Department of Transportation (INDOT) to name a bridge and a portion of a state road in memory of two local military heroes. more »

STATEHOUSE (June 29, 2017) — State Sen. Eric Bassler (R-Washington) will serve on the following study committees, commission and council during the summer and fall months to help prepare for the 2017 session of the General Assembly: more »

This past legislative session, the General Assembly passed a new two-year state budget, which has now been signed into law by Gov. Eric Holcomb. House Enrolled Act 1001, commonly known as the “budget bill,” focuses on funding Indiana’s most important priorities and services while living within our means. more »

As a member of the Senate Committee on Education and Career Development, one of my goals is to ensure that our education system is up-to-date with modern-day workforce demands. Unfortunately, studies show that currently this is not the case. more » 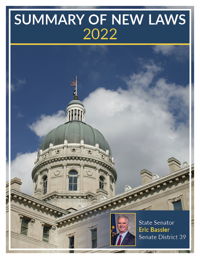